The Juan de Fuca Salmon Restoration Society was formed as a result of a symposium on salmon organized by the Sooke Region Historical Society in September 2002 which was held at Edward Milne Community School. Many presenters from a variety of disciplines and backgrounds of experience made contributions to the two-day program, titled SALMON: PAST–PRESENT-FUTURE.

The resulting organization, JdFSRS was formed, incorporated under the Societies Act of BC in January 2003, with the objective of drawing together and working towards consensus, salmon enhancement – focused groups and individuals within the area from Sooke Basin to the San Juan River valley.  Education and co-operation were identified as key elements of the Society’s objectives as they worked towards enhancement of salmon habitat and stocks. Charitable status through Revenue Canada was approved in August 2010. A variety of endeavours have been undertaken and continue apace, as determined by the elected board of Directors of Juan de Fuca Salmon Restoration Society.

Governance of the Juan de Fuca Salmon Restoration Society is the responsibility of its 11-member Board of Directors, elected annually. The organization’s fiscal year runs from January 1st to December 31st. Board members elected at the AGM held March 11, 2015, are:

Where to find us 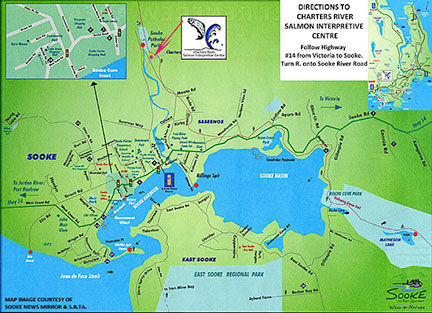